The Story Behind Those 300 Drones in Gaga’s Halftime Performance

Apparently some people played football at Superbowl LI this weekend but I was too busy being set on fire by Lady Gaga’s halftime performance to notice. Not only did she actually sing the entire set (no lip-synching for her), and entirely on her own (no guest performances either), but she also propelled down from the ceiling, danced almost non-stop for 13 minutes, and jumped off a ladder in heels while catching a football. I feel tired just writing that.

One of the best parts of the performance wasn’t achieved by Gaga at all, but by science! And by that, I mean the 300 drones that floated behind her at the start of her set while she sang God Bless America. Though only there for a couple minutes, those little robots performed their own perfect show in the sky: first sparkling like stars, then like the Pepsi symbol, then like the American flag. 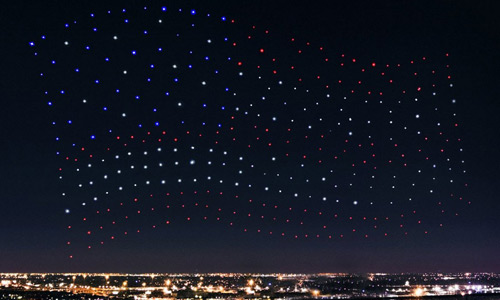 So who’s behind this technology? Well, that would be Intel, and it’s called their Shooting Star drone squad. They recently finished a three-week run at Disney World and last year they flew 500 synchronized drones over Sydney, setting a new world record for most unmanned aerial vehicles airborne at the same time.

Take a look at Intel’s video showing off their 500 Drone light show below:

Pretty incredible right? I want to go to a drone show ASAP. I love how they can float like fairies at one moment, and then in another sync up to create a flawless design like the Intel logo.

As Wired’s recent post details, each drone is about a footlong square, weighs just over eight ounces, and has a foam body to soften any inadvertent blows. Their LEDs have a potential four billion colour combinations and “dance” according to the coding from a central computer that each drone communicates with. Before the show, this computer checks each drone’s battery level and GPS signal strength and assigns it a role accordingly. If any of them fail, there are backups ready to fly into place. You can see how this kind of technology could be limitless, and I wouldn’t be surprised if instead of fireworks on our national holidays, we start seeing drone-works.

That being said, there are laws concerning drones, including where and how high you can fly them. That’s why the drone display you saw yesterday was actually filmed a week ago, so as not to harm any potential fans below.

When you realize the planning and combined efforts that must have gone into that first couple of minutes of this performance, you realize how huge the Superbowl halftime show has become. I can only imagine where it will go in the future.

Not to mention where this drone technology will go. Intel envisions them being used for search and rescue missions or commercial applications like inspecting hazardous construction sites.  Personally, I see their creative potential, and can envision spectacles of art and “sky graffiti” lighting up the night. I just hope they don’t fall on anyone’s head.